to Know About Me 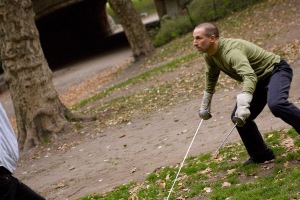 1. I’ve fenced on and off (more on than off) for thirty years, first learning from a Russian teacher named Tanya Adomovich at C.W. Post LIU, and later from Joe Daly at HB Studios and Joe Brodeth at Metropolis fencing when it was still in business. I wanted to fence since I saw Captain Blood and The Mark of Zorro when I was eight very near to the age Cid found their magic. I fence épée, foil, and saber, but my favorite by far is épée. I love not having to deal with right of way and having the whole body as a target. There is nothing cooler than being in the midst of an épée bout, and being in “the zone” watching and anticipating the movements of your opponents blade.

2. I love stage combat and stage fencing in particular. Whacking each other with real broadswords (they are so loud!) in perfectly choreographed movements (okay – clumsy most of the time but every once in a while with a lot of practice…), pretending you are a knight, or Shakespeare’s own, is a real thrill. I don’t get tired of it. It’s like being a kid again and pretending to play with wooden swords, only these are real. Joe Daly is my mentor and, as he would tell you, “I taught Joe everything he knows.” When I first met Joe I told him I fenced competitively… one time. From then on he told everybody I was a competitive fencer. I kept reminding him I only fenced once in actual competition. He still calls me a competitive fencer. That’s the world of acting in a nutshell – myth and magic. Some days I think I’m a competitive fencer too.

3. When I was a teenager I was terrified of public speaking. The first time I had to do a presentation in high school I dropped all my 75 index cards on the floor just as I introduced myself. I know. It was a ten minute presentation – what was I doing with 75 densely packed-to-the-edges couldn’t-read’em-if-I-tried index cards? Now I conduct workshops at conferences for hundreds of people and have taught over a thousand people how to do public speaking. Sometimes you have to start out being bad at something in order to become good at it.

4. I love to play sports. It really doesn’t matter to me whether I’m good at the sport or not – I pretty much like most that I’ve had the opportunity to play. But rugby is a personal favorite. I found out about the game when I was in ninth grade when one of my football coaches, who had just returned from England, told us about it and let us play a little during a summer practice. I first played on a team when I was 20 years old and I loved it from the first moment I picked up the ball and ran with it. I played mostly fullback, and some wing, though I can truthfully say I had the chance to play every position during my career at least once. My claim to fame was having broken my nose 9 times in games. Of course my nickname (all rugby players have nicknames) was Joe “Nose.” I played rugby for 16 years in Division, I, II, and III (mostly II and III) New York Metropolitan Rugby Union. My team was the Long Island Rugby Football Club otherwise known as “the Rhinos.” I stopped playing just before my son was born. The Rhinos are still in existence and I still get their emails asking me to come back and play old-boys with them. Maybe someday…

5. Rugby is a rough sport. So is judo and football, two other sports I played competitively. Here’s the total list of my injuries: 12 broken noses (one was a re-break in the doctor’s office – I can still remember his words to me just before he straightened it out. He placed his hands on my nose, knee on my chest, and said, “Look out the window, and think of something else.”), 5 concussions, 4 separated shoulders right side, 3 on the left, 1 separated sternum (ouch that one hurt), a broken knuckle, a broken metatarsal in the foot, a broken collar bone, torn ligaments on both knees (my knees crackle when I go up stairs), at least 34 stitches in my head that I can remember, and some degeneration in one and only one of my thoracic disks.

6. I was in the Peace Corp in Honduras for 2 ½ years where I worked part of the time near the Nicaraguan border and part of the time in the capital with cashew growers, artisans, and Covenant House. I even visited la Mosquitia (otherwise known as the Mosquito Coast). It was a life changing experience that made me see the world differently.

7. I love to draw – line drawings, markers and pen and ink. Whenever I haven’t been able to write I usually draw. I carry a pen and small drawing pad pretty much everywhere I go.

8. I have a daily yoga practice (including seated meditation) and teach yoga. I’ve been practicing for over fourteen years. The last four years I’ve practiced every day with very few exceptions anywhere from fifteen minutes to two hours, with about 45 minutes my average session. Yoga has, in many ways saved my life. It helps me to be grounded and to find stillness in, what for me is a way too busy world. I teach vinyasa style (flowing yoga) but I’ve studied, Iyengar and Integral styles in addition to several different vinyasa forms. I enjoy yogic philosophy (who doesn’t, right?) and have read The Yoga Sutras a number of times. I’m still trying to figure out what it all means.

9. My top ten movies as of today include: Cool Hand Luke, The Lord of the Rings Trilogy (that’s three right there), The Seahawks (my favorite Errol Flynn film as of this moment), and The Seven Samurai and The Magnificent Seven (the Akira Kurosawa version and the American remake in the wild west), the first and third Harry Potter films The Sorcers Stone and The Prisoner of Azkaban (the jury’s still out on the last installment but I liked Deathly Hallows Part I), and Kung Fu Panda (what can I say, my son is 8 years old and I’m a sucker for funny animated Jack Black martial arts pics).

10. My top five YA books I read in the last year include: The Marbury Lens and Ghostmedicine by Andrew Smith, Madapple by Christina Meldrum, Scars by Cheryl Rainfeld, and The Contender by Robert Lipsyte.