There are different kinds of waiting games that writer’s play and none of them are fun. Well, for me most are painful, mixed occasionally with moments of pleasure, but not fun. Definitely not fun. What do writer’s wait for? Here’s four to start with.

I’m sitting in New Orleans Louis Armstrong Airport with Max and Karen waiting for Jetlbue flight 576 to arrive to head back to New York. It’s a long story and I’ve only got the energy for a short version.

Drug Court conference for the state of Louisiana. I did a plenary for the whole association (some 400 practitioners) on Cultural Competency and LGBT clients – a workshop for about 100 on Young Adult Developmental Issues. I said the words penis and vagina out loud. You had to be there to get the context but it was a moment I’m proud of.

Karen and Max came down here with me. It was their first time here. We did Mardi Gras, and a swamp tour, and Max held a baby alligator, and we ate beignets (Max laughed and made the powdered sugar go all over the place), and we caught beads thrown from parade floats, and walked the French Quarter.

Grant proposals are due. My work as Ex Dir is giving me constant brain freeze. I’m running out of steam.

I haven’t posted since December but I’ve been writing. That’s good.

Half of one book (Cid prequel) and half of another (modern-day). I’ve been marking new pages on a note app and am up to 42 this year on the modern-day newbie. That puts the total for modern-day up to about 135. Writing is good.

I’ll work some on the plane ride home. I’ve promised myself that. That and a movie  – perhaps a comedy. We could all use a good laugh. We’re heading into the cold and a coming snowstorm.

I read The Bully Pulpit – by Doris Kearns Goodwin – a massive tome about Taft and Roosevelt. It was a long long tough read but totally worth it – even if Teddy R comes out looking like an ass at the end. Small print and many hours reading later…

Taft was an introvert. Long live the introverts. They are different kinds of leaders and good ones too.

The Kingdom of Ass-holes

I know. I know. But tell me if you saw a book like this in the bookstore, that you wouldn’t pick it up to at least, you know, look.

I’ve been reading a book called, Ass-holes, A theory, by Aaron James and thoroughly enjoying it. James is a Harvard educated philosophy doc and takes a philosophical approach to looking at assholes and you either go with it or you don’t. I did. It reminded me of an extended, funny Monty Python sketch. He’s not going to tell you how to deal with assholes. He’s just going to examine them and identify them, and try to figure out why they appear in our world in such large numbers.

James sets up a hypothesis for what makes up an asshole as opposed to a psycho, tyrant, scumbag, or jerk. He likes to work from the middle of the spectrum of assholedom.

Why am I writing about assholes? It occurred to me while I was contemplating reading Ass-holes, that I should buy the iBook version and read it on my iPad – one less book to carry around while traveling. Then I realized once again – for I go back and forth on this over and over again – that if I continued this pattern I would not longer buy books from independent bookstores – which, if they no longer exist, would be the end of civilization as we know it.

Besides, I bought Ass-holes because I saw it in the window of Kramer Books on Dupont Circle in DC – a great bookstore, coffee shop and diner.  They earned the purchase by their display, their wonderful sales help, allowing me to wander through their aisles for an hour, and their all around awesomeness.

So in a way, if I didn’t buy the hardcover I would have been an asshole without a cover.

It’s my rationalization and I’m sticking to it.

Y is for Yielding Parry 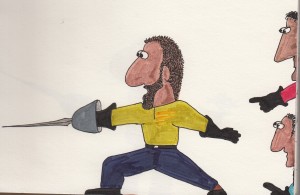 A yielding or ceding parry is a parry executed against a flowing attack without separating the blades.

For example. You lunge and your opponent parries. As he counter attacks you remain in contact with his blade as you slide his foible into your forte and parry him in return. This is a move for point work (small-sword, foil, épée) and is a nice contrast to the sound of tick-tacking blades (if you were choreographing a fight…).

X is for Xiphoid 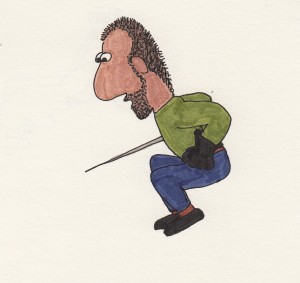 What the hell is a xiphoid? Let me tell you. Even my spell check doesn’t recognize it as a word… but it is. I had to dig deep for this one. Because really, there are not a lot of X-words out there and how many could really have anything to do with fencing?

Xiphoid, (Urban Dictionary) also known as a Retractable Forearm Dagger, is a class of weapons with a blade that is retractable into a forearm worn wristband or bracer sheath.Designed for swift and quick surprise attacks. Xiphoid is used with other wrist-mounted weapons: claw xiphoid, gun xiphoid, spike xiphoid
Weapons known as Xiphoids include wrist-blades, forearm-swords, wrist-spikes, wrist-crossbow, wrist-flamethrower,hidden sleeve gun rigs, etc.
Can you imagine a fight between sword and xiphoids (rather than sword and dagger?)? The xiphoid acts as both defense and secondary attacking weapon. Or two xiphoids drawn silently in a large crowd. They appear as if by magic in combatants hands and the violence is swift (as knife fights tend to be), leaving a space in the crowd for one body to be seen amidst an expanding pool of blood.
Now tell me the idea of a xiphoid wrist-flamethrower didn’t get your morning off to a good start.