H is for Hit

Colpira senza essere colpito. Hit but don’t get hit. This is from an Italian Master of fencing from the 16th century.

What’s the difference between competitive fencing, a duel, and staged choreography? There is a conceptual difference that is important for writer’s to understand and incorporate into their work. It all centers around what it means to be hit.

Stage combat is choreographed (if someone ever says to you, “Let’s just go at it and see what happens. It’ll be more spontaneous that way.” Run. Run as fast as you can.). It is like a dance made just for the characters involved, tailored to each of their personalities. A fight that could be used by any character without signature is a generic fight that doesn’t add to the story. It is a fight for a fight’s sake. Hollywood does this all the time. That’s why so many fights look the same and even though the action is kinetic it is ultimately un-engaging and leaves us feeling used – as if we weren’t considered smart enough by the director to handle the “smart fight.” Don’t get me started.

Competitive fencing with épée (the closest to a dueling weapon) allows double touches and scores a hit for one and not the other if you hit a fraction of a second before your opponent. You don’t worry about the second hit because it’s later and doesn’t count. We’re not hitting to kill or draw blood. It is a sport. Hits are called touches. The weapons are dangerous (why else wear masks and canvas to protect ourselves?) but safety is emphasized in the rules and play stops after every touch.

What about a duel? The mind-set changes. If it’s to first blood it can be blood anywhere so hits to the wrist and arm may be sufficient. But fights to the death are another story. What follows is from Aldo’s Nadi’s book On Fencing chapter in which he describes a duel he was involved in 1910. Remember, this is a man who was considered the greatest fencer of his time. No one could beat him. Then he challenges a forty-year old fencing critic who has fought 4 previous duels before while he, at 24, although he has just won the championship in three weapons has never fought in one. This chapter is worth reading. Here’s an excerpt in Nadi’s words.

“…You have heard shouts under the mask before, and you have never paid the slightest attention to them. why even without mask, this man is like any other. He is armed with a weapon quite familiar to you, and there is no reason why he should beat you–none whatever. When these few seconds of uncertainty and uncontrollable fear and doubt are over, you counterattack, and touch, precisely where you wanted to touch–at the wrist, well through the glove and white silk. but during the violent action of your adversary, his blade snaps into yours, and its point whips into your forearm. you hardly feel anything–no pain anyway; but you know that after having touched him, you have been touched too. “Halt!” shrieks the director.

Caring not for your own wound, you immediately look at your opponent’s wrist, and then up at his face. Why on earth does he look so pleased? Haven’t you touched him first? Yes, but this is no mere competition. He has indeed every reason to be satisfied for having wounded you–supposedly a champion–even if he nicked you after you touched him.

Young man, you must never be touched. Otherwise, the blood now coming out of your arm may instead be spurting from your chest…” – Aldo Nadi

G is for Grip 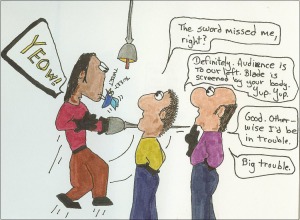 Aldo Nadi, probably one of the greatest fencers of the 20th century, says in his autobiography The Living Sword, that you can tell a lot about someone by the way they hold a sword and the way they fence.

Grip is both how you hold the sword and what the sword’s handle or grip looks like. The big three are French, Italian, and pistol. There used to be Spanish style also but from what I can tell that is long gone. Italian is right behind it. Notice in the picture that follows the French style is simple, straight, and conforms to the palm and wrist. 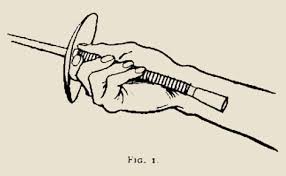 The classic duel is between French and Italian style – not gangnam style. Pistol grip replaced Italian around the 1970’s. Notice the Italian style in the picture has a crossbar and two metal rings for the fingers.

The myth is Italian style is no longer competition eligible. The reality is it has gone out of fashion and few make them any more.

The pistol grip is the most popular today because it gives a fencer more control over his blade. There are six or seven different types of pistol grips. My problem with the pistol grip (and note that I have used it on occasion – basically when I don’t have access to my own weapons because I’m traveling – hey it’s my excuse) is that it makes me feel like I’m firing a weapon and not fencing. I know, I know. That’s ridiculous. But Italian grip looks most like a real sword to me. I like to use my imagination in my swordplay. What’s a real sword? One that makes me go, “Ooooo.”

One of my fencing teachers, Joe Brodeth, gave me an old Italian dry foil (non-electric) that he used to use back in the fifties when he first came to the states. He gave it to me knowing I would carry on the tradition and use it too. I still do. I am not fully trained in the style but I’ve read Nadi’s book On Fencing. And I had Joe Brodeth give me some guidance in the form of lessons.

The grip and the pommel and the hilt can be ornate or they can be plain, unblemished or scarred. They can reflect the personality of the user, just as grip can. French style avoids the blade and is used with finesse. Italian attacks the blade and uses some muscle because the grip is stronger. Italian is strong enough to disarm. Pistol can do all of the above. Of course this is all modern competitive styles. The broadsword and rapiers were much simpler because mostly their purpose was to use their edge so little point control was required. 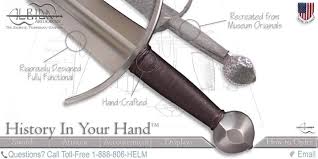