I was in Denver this week teaching Cultural Competency workshops to drug court practitioners. But I had my evenings free.

The first stop was The Denver Fencing Center (fencing is big in Denver with about 10 different fencing salles to choose from) and it was huge. I think they had 10-12 strips in four different rooms. Great space. Nathan Anderson is the Head Coach/Owner and he was a great host. I gave the center two copies of Open Wounds and a bunch of book marks. I fenced for two hours (group lesson and some open fencing) wheezing badly from the high altitude (yes, that’s why I fenced so badly – it’s my excuse and I’m sticking with it!) but really enjoyed the good company on and off the strip. Fencers are great company and this salle has a good feel to it. Before I left that evening one copy of the book was already gone – in someone’s backpack and out the door.

Second evening I was taken to dinner by Pam (aka: Joemmamma at Life Happens While Books are Waiting blog) and her wonderful family at a great Italian restaurant called Maggianos. We talked books, movies, and more books until the last piece of desert was finished. Pam’s blog named my book one of her favorites in 2011 and she was one of the first bloggers to review it. Thank you Pam.

Third evening I finished work early and headed out to the Tattered Cover Bookstore in downtown Denver on 16th street. There are three of these wonderful, beautiful stores in Denver and my last time in town I visited all three in the hope of getting them to pick up my book and carry it in their stores. They ordered the book and have been carrying it ever since. This year I was on foot and using mass transit so I was only able to visit one store. 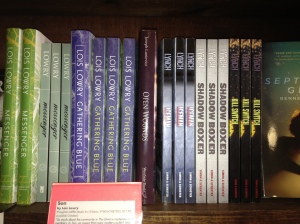 Open Wounds on the Shelf!

I visited the 16th street store and my book was on the shelf. It made my day. I pulled it off the shelf and found Barry, the YA expert, and signed the book. She stickered it and I gave her a bunch of bookmarks to give away.

Barry recommended a book titled The Girl who Circumnavigated Fairyland in a ship of her own making by Valente very strongly for my son and for me. I later found out she liked the book so much she had talked to every staff person in the store about it (even gave each of them a copy and said “read”).

This is the kind of word of mouth that gets a book noticed. Hearing this story just made me smile. It’s one of the reasons I love books and bookselling. It’s why I keep stopping in indie-stores with copies of Open Wounds. If just one bookseller reads it and likes it – look at what a champion can do. I met the manager and thanked her for carrying my book and spoke to the baristas (who made a killer latte). I left the store flying.

Took the Lite-Train to Evans and walked to Navajo Street for some more fencing. I might have been getting used to the altitude or it could be I worked out some of the kinks from the last time there, but fenced another two hours – until I just about dropped but in a much more dignified manner.

Met a coach named Bob Block who knows Witold Rak, a fencing coach who runs his own backyard salle in Woodside near where I live. I found out the person who took Open Wounds to read two nights before was another coach Paul Von Rentzell (who also lent me his prize epee to use – it was awesome and now that I think of it – probably the reason I fenced better) and his review of my book was a big thumbs up.

Denver couldn’t have been better.