Why did you write a historical novel and why did you want to write about fencing? This is a question from Ms. Maddy Black’s 8th grade class last week.

The truth is I had no desire to write a historical novel. I had no idea I had one in me. As I realized my story was going to take place in the past I even fought against it. I knew I would not be able to rely on my contemporary point of view for the novel and since I’d never worked without that before I grew overwhelmed by the concept of a historical novel very quickly. How could I possibly speak with confidence about what it was like to live in 1936 or 1942? I wasn’t even alive back then. And the more research I did the more overwhelmed I became. It seemed in order to be an expert on the era, or to feel competence in my knowledge of the era I would have to read an incredible number of heavy, thick, dry-looking books and microfiche newspapers.

But at some point my curiosity and interest in the period overcame my anxiety and I began to write. I even became so involved in the research that I overdid it and had to cut about half of what I looked up, out. I even found I enjoyed the details of life from that time period. I found it fascinating.

Also, my protagonist, Cid Wymann, was 7 in 1936 so I either wrote about him in 1936 or wrote about a different character. I’ve written before about the vision I had of a 72-year-old Cid dueling with épées on the roof of the Chelsea Hotel so I won’t go into it here – but those were my constraints. I either wrote about him when he lived or I wrote about someone else. but no one else haunted me the way Cid did. That image wouldn’t go away.

Andrew Smith (author of Stick, The Marbury Lens, Ghost Medicine, and In the Path of Falling Objects) says his stories come through him, as if he was a medium for a story that had to be told. I see writing very much the same way. The characters gnaw at me. They worry me like a dog with a bone until I start to tell their story. Writing for me is then very much a journey to figure out who the protagonist is and what his story is that needs to be told.

And why fencing? I have been in love with swordplay since I was a kid, fenced since college, and taught stage combat to actors. I find I write about things that I do, that I feel a passion for. And so the man on the roof of the Chelsea hotel was fencing and his tale began when he was 7 – when Aldo Nadi, the greatest fencer of the 20th century, perhaps of all time, came to New York City and gave a fencing exhibition at The Plaza and on the same weekend that Errol Flynn’s Captain Blood premiered. I guess you could say I had not choice. Open Wounds would be a historical novel and there would be swordplay in it. 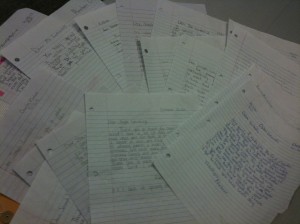 They wrote me letters.

My friend Leslie handed me a stuffed white envelope filled with them. They run from quarter page to full-page, are written in black pen and blue, with some in pencil. Some say Dear Joseph and some say Dear Joe, some Mr. Lunievicz and some Joseph Lunievicz. They all thank me for coming to their class so I’ll only share a few over the next couple of posts. I hope you find them as fascinating and wonderful as I do.

I really like the first chapter you wrote and with more understanding of the reason why you wrote this book I can say that I understand the haunted feeling you went through. I’ve known what you meant by vision it’s day dreaming of the haunted feeling. I want to know how you finished your book. I’ve only wrote so short of my small moment but I’ve only been speaking English for six year. I’m an Arabian girl. I want to make sure that one day I can be as creative as you are. And write abou the war in the Arabian war. Thank you. I hope I get to read your book some day.

I told them about my vision of a 72-year-old Cid Wymann (protagonist of Open Wounds) on the roof of the Chelsea hotel dueling with sharps with a man whose face I couldn’t see – the idea which consciously began the Cid Wymann story. I am always amazed at what people hear when I talk – what sticks with them as important. I love this letter.

PS I suck at spelling too.

Okay. So I told them all how bad at spelling I am and at least one student heard that and took heart that she could be a writer in spite of being spelling-challenged. She’s even got an editorial pack already in place. I can’t wait to read one of her stories.

Honestly, I was not hurt to hear that a vampire prince came first. I wouldn’t expect students to put down what they’re reading and start my novel. They should at least finish the chapter. But seriously, who said boys don’t read?
From now on whenever I get down about the publishing business or about the writing process I’m going to take out the letters from Ms. Maddy’s 8th grade class… and smile.

I went to Harlem today to visit a middle school’s eighth grade – PS/MS 161M, Don Pedro Albizu Campos School on 134th and Broadway. It’s right next to City College where I spent a year taking graduate classes in their creative writing masters program. I ran out of money after one year and never went back, but it was a good experience never-the-less. My friend Leslie set it up. She’s an Assistant Principal at the school and, after reading my book, accepted my offer to come in and talk about it with her eighth grade students.

Q&A can be tricky with eighth graders. There can be a lot of silence. These kids were great but I was worried at first as only one girl raised her hand. A boy and another girl seemed to raise their hands but then put them down. Perhaps it was peer pressure or maybe they were just stretching.

I called on the girl with her hand still assertively raised. Thank God she had a question. She opened a notebook she had with her, gazed down what seemed like a list of questions she had prepared, and asked the first of half a dozen that she would try to get to. I don’t remember what her first question was because right after I answered it five hands sprang into the air, then another few right after that. And the questions were good and they kept coming. Here’s a sampling of them:

But this was the best. It wasn’t one of their questions. It was their answer to a question that I asked them. “Which would you rather do, take seven years to write a novel or one month? How many say seven years?”

Almost half the room raised their hands. I was in a bit of shock. I didn’t think any would.

“How many say one month?”

The other half raised their hands.

“Of those who said seven years, why did you say that?”

The girl who asked the first question raised her hand. “Because if it takes seven years then when I hand it in, it will be perfect.” Brilliant. Absolutely brilliant.

“And why one month?”

A boy raised his hand. “If it takes only one month then I’m writing really well, really fast.” Brilliant again.

I left three books with them – one for each class teacher and one for the library. How could I not? And whoever said middle school years were the lost years?