F is for Fencing Measure 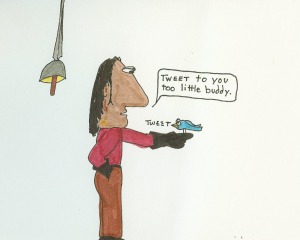 Fencing measure is a stage combat term than means the distance you are at from your opponent that is safe to do your choreography from. You are out of distance of each other’s blades so you can’t be hit but close enough to give the illusion that you can be hit. It’s all smoke and mirrors I know but that’s film and theatre. It’s entertainment and safety is key. But we can learn from this.

You measure this distance by, from your on guard position, extending your arm fully and touching your opponents bell guard with your point. Tip to guard. Then you are just out of distance.

Distance is an interesting thing in fencing and in a fight. Depending on the person and how threatening they seem to you and whether their weapon is drawn or not, the distance at which you might be attacked or feel threatened is very different.

In stage combat class most actors get into each other’s faces for violence and forget they have a sword at their side. They’re used to fists. They were not born with a blade in their hand or in the hand of others around them. They have not been training with a sword since childhood and seen death come to their town, city, castle, family, from the razor edge or the point of steel.

Look at how distance is used in the first duel in Ridley Scott’s movie The Duelists. Notice how far they are to start. Almost tip to tip. Watch how scared one combatant is to close the distance and how quickly he leaves the killing space. Notice how Harvey Keitel (with the long hair) understands the distance so well that he plays with it.

Think of this. The edge on a sword should be as sharp as a razor. The point is like a pin.

I can tell you having seen a real machete (a slightly curved weapon that has one sharp edge used for farming and self-defense) fight in a very remote community in Honduras somewhere near the Nicaraguan border that thirty feet away was not far enough. When the combatants ran at each other and their blades hit sparks flew and people dove for cover – me included. I saw the wounds of one man up close after the fight and after applying some basic first aid – pressure to stop the heavy blood flow – helped to carry him to a hospital a few hours away on foot. I got to see his wounds up close. One wound across his chest took 34 stitches and a cut that scored his forehead near his hairline left a flap of skin that fell forward across his face. These wounds were enough to give me great respect for and want to keep a great distance from – a blade.

Distance is everything. You can’t hit someone if you can’t get close enough. And if you can hit them, they most likely can also hit you.

This entry was posted on April 6, 2013 by Joe Lunievicz. It was filed under A-Z Challenge, Blog, Fencing, Films with Swords, On Writing, Stage Combat, The Duelists . 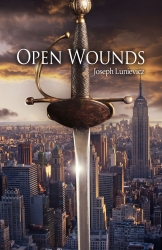